Note: In February 2015, our MA Geography students attended a special workshop: a walk along the River Dodder with the Dodder Anglers, artist Martina O’Brien, and CREATE. The following blog post by Aoife Kavanagh follows up on an earlier post by Karen Till, which introduced readers to the exhibition Casting Territory created by the artist Martina O’Brien with anglers on the Dodder.

Geographer Yi-Fu Tuan argues that our notion of place is formed of experience and feeling, and is reliant also on sensory perception. We as human beings have a particular capacity to partake in this formation of place, and as we become familiar with a place, we imbue it with meaning. However, the everyday lived experience of place can be overlooked, though this is, in fact, of just as much importance as anything else in the shaping of place. Intimate and close experiences of place play a nurturing, healing and protective role in our lives. Tuan highlights experiential and emotive facets of place which he suggests ‘nurture’ us when he speaks about the capacity of places to act as ‘fields of care’ (Tuan, 1979).

‘Feelings and intimate experiences are inchoate and unmanageable to most people, but writers and artists have found ways of giving them form’ (Tuan, 1977: 202).

It is often difficult to express our intimate experiences of and relationships with place, yet, as Tuan suggests, artists are often able to make tangible that which is difficult to depict or describe through words. Tuan has explored the capacity of art and artwork in communicating this notion of place and our relationship to place. Various art forms, including photography, poetry, painting, music and dance are said not only to capture and depict the sort of spirit of place and place-making, but by themselves to create a depth of meaning on a parallel with that of place, as Tuan suggests in the quote above. Art encapsulates that which is poignant and unique, yet also everyday and commonplace, and can depict life stories or simply a single moment (Tuan, 2004).

I had the pleasure of visiting a multi-sited exhibition entitled Casting Territory: A Contemporary River Keepers’ Index of Lesser Known Patterns, by Martina O’Brien and the Dodder Anglers Club on 21 February 2015. As part of GY627, ‘Places, Landscapes and Mappings’, we participated in public discussions, informal conversations, a walk along the Dodder, and a visit to two of the three exhibition venues along the River Dodder. The experience really illustrated for me many of the concepts and ideas relating to place which I had encountered in reading Tuan’s work. It also resonated with my MA thesis, in which I examined how my fellow musicians and community-based musical groups created musical fields of care in Carlow, and were, at the same time, inspired and nurtured by particular places in Carlow.

The Dodder anglers went on a journey with O’Brien, a community-based visual artist who invited the fishermen to explore their attachments to the river by creating this exhibition. In the process they became artists — or, rather, came to recognise their dual role as anglers and artists of everyday — by learning how to communicate to a general public the depth of their attachments to the river and local environmental expertise through their crafts of fly-tying and fishing. O’Brien tasked the anglers with reflecting on the River Dodder, on fishing there, on their memories of and connections to the river and the place, and on the issues impacting the river. The anglers were asked to produce lures or flies, or small, intricate, detailed and highly artistic artificial insects that they cast into the river to entice fish, to reflect on the themes and issues they identified as important, having reflected on the river. The results were then exhibited, and we were given the chance to speak to the angler-artists at the public discussions at the two exhibition venues and when going on a walk along the Dodder between the venues. Their lures were really beautiful, colourful, elaborate, and yet very small. They had wonderfully descriptive titles, filled with humour, wisdom, and timely ideas; all were deeply personal, too.

My conversations with the anglers about these lures were really enjoyable, and revealed the depth of feeling these men put into the making of their individually crafted lures. One angler, for example, spoke to me about how he sought to maintain a likeness to actual lures and to fishing in his artwork, while also imbuing in each a sort of deeper meaning (pictured below). 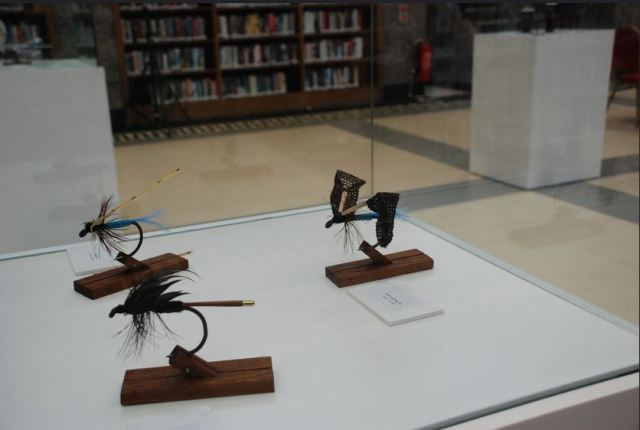 One of his lures, Soft Landing, had a very small and detailed net, evocative of the net with which the anglers sometimes catch the fish to give them a soft landing. On a deeper level, the net and the soft landing to which it alluded represented for the angler the “soft landing” which had been promised to the people of Ireland after the economic crash and bailout. Another of his lures, Fishing Fly, was made of two small fishing rods, which represented wings, and depicted his love of fishing on its simplest level. I also read this lure to possibly represent the anglers fishing for the river, acting as stewards who protect and raise awareness of it. In Fishing for the River: An Dothra Guardians in Martina O’Brien’s ‘Casting Territory’, Till (2015) similarly explores how the visiting public might see the river through the eyes of the anglers, who, through the lures, raise awareness of issues which affect not only the river, but also touch the lives of those who might not otherwise have thought of themselves as connected to the river or the anglers, as the Water Meter Fly would suggest.

These flies represent the ways in which deep and emotional connections to place can be represented through art, as Tuan suggests. The depth of these connections became more and more apparent to me throughout the day, and when we walked along the Dodder with the anglers, they spoke about the effects of development around the river, and how they had tried to warn of the possible negative effects of this to the local authorities. However, they felt their warnings fell on deaf ears. They expressed the journeys of indignation, fear and regret they had undergone over time, and their efforts to safeguard the river throughout. Many of the anglers are highly skilled individuals (in addition to angling), and they brought their professional expertise together with their local history of stewardship efforts when crafting some of the lures on display too. One example was a set of lures created by an engineer from the group which were scale replicas of each of the bridges along the river.

Conversation with the anglers also illustrated to me a sense of transformation which they had undergone in working with Martina on this project and coming up with their individual concepts for the lures which would go on display. I asked some of the anglers whether this process had been a difficult one, and some replied that they didn’t really think of making lures as an art form. Yet their work was being exhibited (and written about, and discussed) as their own crafts and pieces of art. In the larger group discussion, some pointed to the difficulty of being referred to as artists, since they had never seen themselves in that capacity, as they understand making lures as simply part of the fishing process. I also asked some of the anglers whether their relationship with the river and place had changed as a result of participating in the exhibition, and one angler in particular responded that his connection with the river had grown, because he had truly reflected on what the river meant to him, what had happened to it over time, and his hopes for it, into the future. Perhaps through the creative process, these individuals began to experience new things, which in turn, enabled them to experience the Dodder, as a place, in new ways — experiences that Tuan argues are integral to the process of place-making.

The lures they created were vividly coloured, with a range of textures and materials, and in a range of sizes. They said that the choice of these materials relied on the look and feel of the materials, to the anglers, and their suitability for the particular area of the river, and type of fish they are trying to catch. The highly place-based knowledge of how to choose these materials was gained through personal experience of, and growing up with, the river over time. The anglers told deeply personal stories of memories they had from fishing on the river in childhood, learning the skill from parents, relatives or friends, particular trips to the river, teaching their own children to fish, and describing their favourite spots to fish. Here, I was reminded of Tuan’s emphasis on experience, feeling, and the role of senses in discerning and shaping place. The anglers described how their favourite spots might have a particular lighting, a particular shade, a particular fish in that area, or a particular association with childhood or their younger lives fishing. Some also said that they lived or worked along the river, and that they sometimes retreated to the river as a place for relaxation and reflection, both of which suggest the healing, nurturing capacity of place, and the notion of home-place discussed above.

One of the most striking aspects of the entire experience of the exhibition, for me, was the fact that everybody has the capacity to be an artist, and most especially through journeying with a community-based artist. Conversely then, everything that we do, and everything that exists in the everyday, may also be art. The anglers spoke about the process of becoming artists, but it is arguable that their lures are (or were) art works anyway, not only because of their aesthetic beauty, but because of the density of meaning behind them for the anglers, and their connection to place, be their purpose for fishing or not. The fact that the river provides a place of comfort, reflection and meaning to the anglers indicates that they share with it that particular connection which, Tuan argues, is difficult to put into words. I think that community-based art and art-work as discussed here and exhibited in Casting Territory can also play a very important role in the lives of those who participate in its creation. During our group discussion with the angler-artists and others during our visit, many of the anglers detailed the enjoyment they experienced in participating in the project. In individual conversations too, anglers described the confidence and pride resulting from their participation. Thus, while the angler-artists acted as stewards and guardians of the river, raising awareness and protecting it, one might also suggest that the river (and, by extension, place), through its role in the anglers’ lives, and then additionally in this instance through the self-actualisation experienced through the reflective and creative aspects of this project, plays an equally care-giving role for the angler-artists.

Aoife Kavanagh is a professional musician, and recently completed her MA in Geography at Maynooth. She has been awarded a John and Pat Hume Scholarship to continue her research about the role of musical ecologies in making places in small Irish towns for her PhD.

Check out our archives